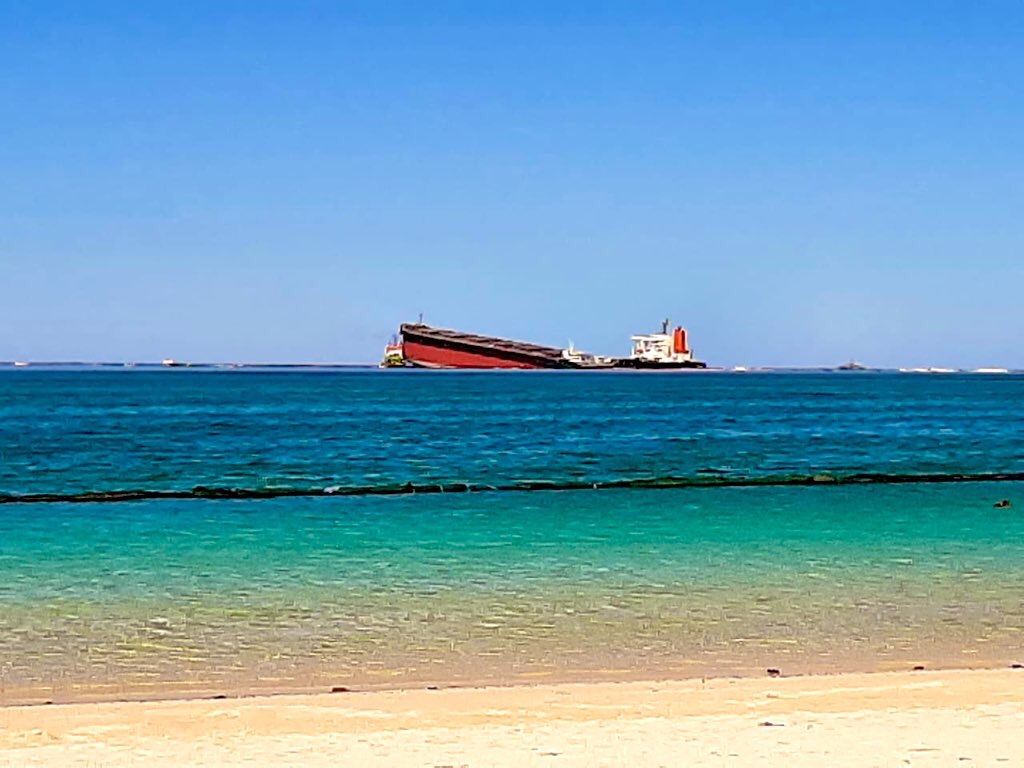 WAKASHIO, A STORYBOOK FOR CHILDREN.

MV WAKASHIO , a Japanese- owned bulk carrier ran aground on the coral reefs, off the coast of the tropical island Mauritius, on 25 July 2020.

Wakashio was empty of cargo but had an estimated 200 tons of diesel and 3,800 tons of heavy fuel oil on board.

Little by little, with the strength of the heavy waves, cracks arose in its hull. Fuel oil started to spill on the turquoise blue sea of the coastal district, Mahebourg. In no time, the oil spill reached its shores, destroying marine life, seaweeds, and corals.

The inhabitants ran to the rescue of the lagoon. They made floating booms with sugar cane straw to absorb the oil. In the meantime, foreign help was sought by the Government of Mauritius to block the catastrophic flood of oil from the hull of Wakashio to the sea.

On Assumption Day 2020, Wakashio broke into two. The authorities estimated that it would take decades to tow the two fragmented parts of the ship. Finally, the bow part of Wakashio was sunk in the deep ocean, far from Mauritius. It was also decided that the stern part of the ship that was stuck in the reefs would take decades to tow back. It remained as the remnant of a shipwreck in the lagoon, in the southeast of the green island.

The story here is told from the perspective of two Mauritian children, Angela and Oshin.

INSPIRATION TO WRITE THE STORYBOOK.

Earlier this year, I started a campaign to urge young Mauritian children to read books.

By coincidence, MV WAKASHIO met with a terrible accident at sea and it became the talk of the town in Mauritius and in the whole world. Social media wrote about the shipwreck and posted pictures of the sinking ship.

It dawned upon me to write the story of the Wakashio for children. I felt deep inside that it was a subject that will draw the attention of children, they will pick up the book and they will start to read.

Reading books and listening to stories stimulates the imagination of children.

As Albert Einstein has wisely said-

Imagination is more important than knowledge,

For knowledge is limited,

Whereas imagination embraces the whole world,

I strongly believe that children of all ages should read books and good books. In this age of electronic books, it is much better for parents to encourage a child to read traditional paper books, that he can carry and read every he goes – under a tree in the garden, on the lap of his mom… even where there is no electricity or an internet connection.

When a child is born, there are two things that he requires – LOVE AND SAFETY;

The next thing the child says is –

TELL ME A STORY.

Undoubtedly stories are an important part of our adult life; without them life is boring. Most of all, children love stories as dearly as they love toys and games.

My mother was an excellent storyteller. I vividly remember the story of Cinderella and Prince Charming  as concocted and told by her when I was a kid. I bemused at her facial expressions and her body movements. I traveled to fairyland, wonderland, to faraway places; I fought with dragons; I talked to birds, rats, rabbits, and other animals.

Mostly, I started to daydream of Prince Charming. Often I took a broom, bigger than myself and arduously swept the kitchen. All the time, I kept an eye on the big pumpkin that mom kept in a corner of the kitchen, wishing that it would explode and Prince Charming would jump out.

From listening to stories, and putting myself in the shoes of Cinderella, I very rapidly developed a fondness for books. From reading books, I gradually started to write stories.

WAKASHIO is my new storybook for children and my first book in French. Mauritian children are more familiar with the French language, oral and written; I have written this book primarily for them.

It is legitimate for writers to remember that children are the adults of tomorrow. They should be made aware of the important happenings of their country and the consequences of their acts from an early age. Wakashio is a tale that relates the story of the wreck of MV Wakashio in pure and simple prose, illustrated by amazing color pictures.

Creative and inspirational writer of stories, poetry, and haikus I am also an addictive reader of novels, poetry, haiku, and children's storybooks. I am the author of SOUL POETRY a book of inspirational poems, verses, and quotes published by Partridge India (2015) The Maker of Miracles (2006) published in the USA by Dorrance Publishing and My Journey with God (2008) published under the banner of Sai Towers, India is the narration about my spiritual journey. My new poetry book INK Echo of life and love published by Éditions de L’Ocean Indien (2019) in Mauritius, my birth country is a collection of love poems extolling the feelings and desires of women. The Princess and the Crow is my first storybook for children, released by Austin Macauley Publishers London in March 2019. Two years later, I was inspired to write and published two other books - WAKASHIO, a storybook for children, and PINK MOON - AN ANTHOLOGY OF HAIKU POEMS. I love to write. I guess my writing has a special cliché of island 🌴 life, natural, unpretentious, and full of beauty. View all posts by Anita Bacha

2 thoughts on “WAKASHIO the book”