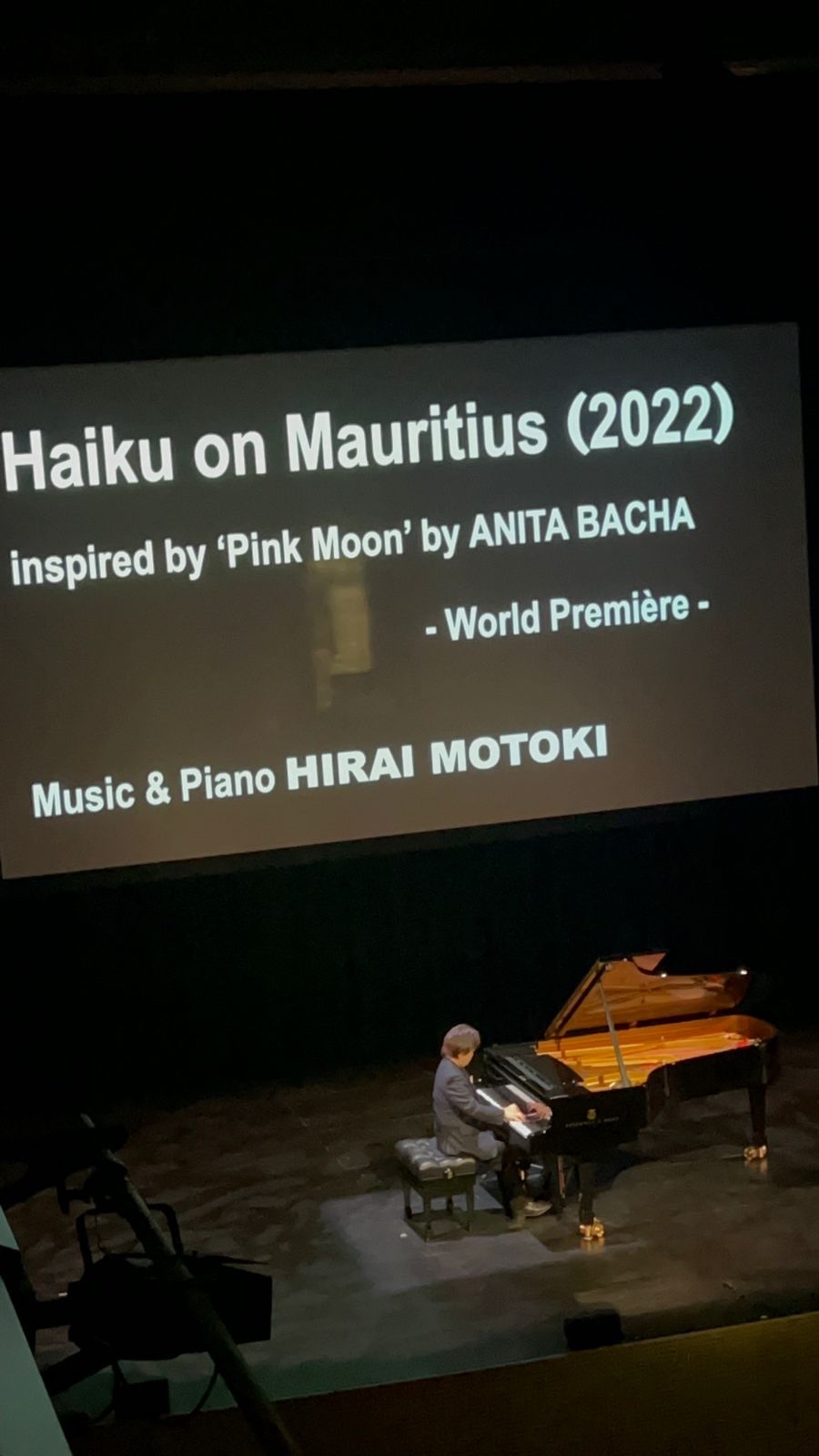 I was immensely honored and pleased to be the Special Guest of the Ambassador of Japan in Mauritius , H.E KAWAGUCHI Shuichiro at the WORLD PREMIERE PIANO RECITAL, HAIKU ON MAURITIUS (2022) inspired by Pink Moon by Anita Bacha by World Acclaimed Japanese Pianist and Composer, HIRAI MOTOKI at the Caudan Arts Centre,Mauritius on 31 August 2022.

I was also overwhelmed with joy that HIRAI MOTOKI drew his inspiration to compose the fabulous piece HAIKU ON MAURITIUS from my book PINK MOON-AN ANTHOLOGY OF HAIKU POEMS (2022) self published by Amazon.

Acclaimed worldwide for his imagination and sensitivity, London based Japanese composer/artist, HIRAI MOTOKI ,has appeared in over 100 countries across the globe, performing in prestigious venues including New York’s Carnegie Hall,Amsterdam’s Royal Concertgebouw, Vienna’s Konzerthaus and London’s Wigmore Hall.

The Guardian  – Hirai Motoki “a most brilliant and sensitive musical talent.”

A memorable evening packed with mind blowing emotions for the audience and for me.

Creative and inspirational writer of stories, poetry, and haikus I am also an addictive reader of novels, poetry, haiku, and children's storybooks. I am the author of SOUL POETRY a book of inspirational poems, verses, and quotes published by Partridge India (2015) The Maker of Miracles (2006) published in the USA by Dorrance Publishing and My Journey with God (2008) published under the banner of Sai Towers, India is the narration about my spiritual journey. My new poetry book INK Echo of life and love published by Éditions de L’Ocean Indien (2019) in Mauritius, my birth country is a collection of love poems extolling the feelings and desires of women. The Princess and the Crow is my first storybook for children, released by Austin Macauley Publishers London in March 2019. Two years later, I was inspired to write and published two other books - WAKASHIO, a storybook for children, and PINK MOON - AN ANTHOLOGY OF HAIKU POEMS. I love to write. I guess my writing has a special cliché of island 🌴 life, natural, unpretentious, and full of beauty. View all posts by Anita Bacha